The Inn at The End of Time

With last week’s blog post being about someone else’s writing, this week seems as good a time as any to update on my own.

While I actually haven’t had a lot of time to write recently, I have been involved in something rather new for me, a play!

A while back I was chatting to one of the organisers of the Black Box Lunchtime Theatre Company and I decided to have a go at writing a play for this. I’ve never tried writing a play before, but once I got started I really enjoyed it. My prose is pretty dialogue heavy at times anyway and I found that cutting it down to just dialogue was actually fun.

To cut a long story short, I finished writing and editing the play and the guys at the Lunchtime Theatre Company said they would be happy to host it. By lucky coincidence my good friend Jennifer had mentioned that she wanted to direct a play and everything came together nicely and “The Inn at the End of Time” moved from an idea in my head to something that is going to actually be on stage.

A few weeks later, I got some further good news that the guys at the Black Box wanted my play to be a part of the upcoming “Culture Night Belfast”. This is an annual event in Belfast where Belfast is transformed into a cultural paradise with music, theatre, dance, visual arts and much more takes to the streets and venues of Belfast for a full day and night of all immersive mentalness. I was over the moon to be asked and thankfully Jen was happy to direct this too so it is now part of the program! 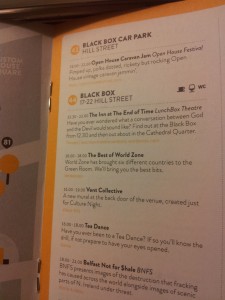 Last night I had the very strange, but also awesomely fun, experience of watching people audition for the play. There are only two characters, God and The Devil, and in total eight people read for both parts. They were all excellent and Jen will have a tough decision as to who will get the parts.

This was a totally new experience for me and it was fascinating to see how different it sounded from different people. I was amazed how, even on a simple first read through; the different actors brought such different personas to the parts. Some played the part almost exactly as I imagined it when I wrote it, which was cool, others were dramatically different, and in some ways better than my original concept. The dynamics between them was also fascinating to see and I can’t wait to see how it develops when the actors are chosen and they have a few rehearsals to actually bring their own interpretation to the characters. It’s great to be there as the writer too, I don’t have to actually do anything or make any decisions; I just get to watch and have fun. I’ll go to some of the initial rehearsals and do some editing and rewriting dependent on how the actors read, but on the whole I get to just enjoy the process and see my writing being directed and performed by people who actually know what they are doing.

So for those of you interested and local, the play will be done as a read through/ rehearsal as part of culture night on the 20th of September and the final production as part of a double header with a another excellent play called “Drunken Monkey” in the Black Box on the 25th of October. I will post more details closer to the time.

One last note thing while I am on the subject of writing. I wrote a handful of short stories recently and am soon going to put a few of them up on Amazon, mostly as a free download. An artist friend of mine is currently working on some cover art for me so this should be available in the next few weeks. I will update here when it is available.