Buddhism, reactivity and getting punched in the face

I was talking to a friend today about a few things and I went off on a bit of a tangent talking about reactivity. I’ve been thinking a bit about it since and thought this would be something worth writing about…

Buddhism has some great guidance and thoughts on reactivity. The fundamental concept being that your reaction to any given situation is fundamentally under your control and thus your choice. This is something that sounds so simple but most of us are actually unaware of this. So for example, when you’re driving and someone cuts you off and you find yourself filled with rage and you begin shouting and cursing at the car, that reaction is your reaction and yours alone. The person who cut you off did not intend to cause you to feel anger, perhaps they were just in a hurry. You could have just hit the brakes, waved them on and got on with your journey.

Anger is a prime example of reactivity that we theoretically control, but in reality it often controls us. If you are in work and a colleague criticises something you have done, how you react to this can vary widely and can affect you in many ways. The other person’s criticism itself also could be scrutinized and examined using the Buddhist concept of intention. However, without actually asking them, you do not know what the person’s intention was in their criticism. In the moment when you are swept up in anger, you don’t consider the intention and for many, a default position would be an assumption of negative intention. We take the criticism of our work as a personal attack with the intention of hurting us. Let’s forget about intention for this blog post and just focus on the reactivity element. When you receive this criticism, you can react in a wide variety of ways. You can feel hurt and upset, you can feel attacked and defensive and angry, you can feel resentful to that person and hold it against them for hours, days, weeks or even months. You may be the sort of person who naturally has a bit of a persecution complex and you take this criticism as yet another example that your life is hard and people victimise you. 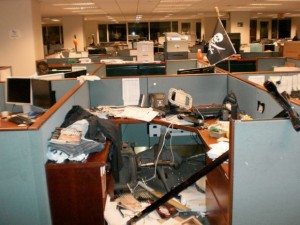 Not the right way to react to workplace criticism

You could react in a way that does not cause you sadness, anger, resentment or hurt. You could think “perhaps they are offering genuine constructive criticsm to help me” and you could take this on board to improve what you have done. Of course if this seems a little too hippyish and unrealistic, you could just think “do I really care about this person’s opinion of my work? Hmmm… nope, I don’t. OK” and get on with your day.

So in any given situation, if you had a choice in the matter… Would you choose the option of being hurt, sad, attacked or angry? I would sincerely doubt it. Weirdly though, being hurt, sad, victimised and angry is often simply the result of our choice to feel that way. The problem is that when we react; we tend to think that this reaction is our only option, driven from some biological imperative that can’t be changed. This simply isn’t the case. Choosing to react differently isn’t easy, but it’s far from impossible. This leads me to the last part of the title of this blog post… Getting punched in the face. 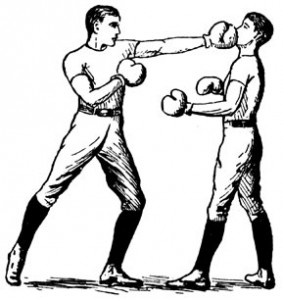 Take that you scoundrel

It’s one thing to have your work criticised and to get angry or upset about it or to find your child drawing on the wall with a crayon and to flip out and start yelling at them. But surely it’s a very different matter to get punched in the face? Right? Well, I would suggest that actually it’s not really that different and being physically attacked is a perfect and very visceral and real way of examining the notion of judging an appropriate response.

If someone walks up to you in the street and physically tries to attack you, there are a wide variety of responses you can have. These range from ducking and running away, to pulling out your gun and shooting your attacker.  Let’s put this aside though, as being physically attacked in the street is not something that happens to us every day. If it does, you should really consider avoiding those particular streets as they would appear to be bad for your health. Seriously… move house or chose a different route for your evening stroll.

When you do any form of combat sport, getting punched in the face is par for the course. When you spar, you hit each other. The contact is light, but how you define light can vary very significantly from person to person. Some people have higher pain thresholds and don’t mind being hit harder. Some people are inexperienced and don’t know how to properly judge the strength of their strikes and pull their punches. But one of the most important things is your reactivity. When you are struck, your natural reaction is to hit back. When you spar, the whole purpose is to control your natural reaction and respond appropriately and consciously. If your partner taps you with a gentle jab to the nose, it’s really not appropriate to see red and try and knock them out with the hardest counterstrike you can manage. If you do that you won’t have a lot of sparring partners. Of course, if you try to do that, it’s probably a sign that you’re inexperienced and thus your clumsy, angry attempts will be easily avoided. What it more common, particularly among inexperienced fools (like me) is to swing back a little bit too hard, mainly cuz you’re pissed off at getting taped on the nose. What can happen then is a simple process of escalation. You take a hit, you get angry and hit back a little too hard. Let’s assume the person you are sparring with is much more experienced. In fact, let’s forget assumptions, this actually happened to me once about 10 years ago.

I did Muay Thai for a while. Not long enough to be even remotely good at it, but long enough to be sparring with people who were far better than me. One night I was sparring with a guy who was very good. He landed a few strikes on me and I hit back a little harder than I should have. He undoubtedly took this as a message that I was ok to go a little harder in the session and responded appropriately. This went back and forth a few times, escalating a little, and ended with blood pouring from my nose and a broken rib.

I have nothing whatsoever against the guy who did that. If he had been more experienced, he may have read the situation differently and realised my escalation was an inappropriate response, stopped me and told me to calm down. As it was, he either took it as a sign that I wanted to go harder or he also reacted inappropriately. Either way, I don’t blame him and I know that it was me that reacted badly. Unlike being attacked in the street, a dojo/gym is a controlled environment. If someone is hitting too hard, you can ask them to take it easy or just stop and walk away. This is where reactivity becomes absolutely key. When a fist or foot flies towards your face, you can panic, and start brawling, or you can remain calm and simply respond in the most appropriate manner dependent on the situation. This reaction could be as little as moving your head backward or to the side by just a few inches.

So to go back to the original notion of reactivity in everyday life. If you can control how you react when physically attacked; a situation where there is a real and present danger to your health and well-being, then surely you can equally control the way you respond when your kid draws on the wall with a crayon? Equally, if your workmate tells you that there are a few typos in your work and that the introduction is a bit wordy and boring then a screaming match and lifelong grudge is surely avoidable.  I said I wasn’t going to talk about intention in this post, hell this is wordy enough as it is, but regardless of intention, your reaction to any given situation is the one thing you can control.

3 thoughts on Buddhism, reactivity and getting punched in the face