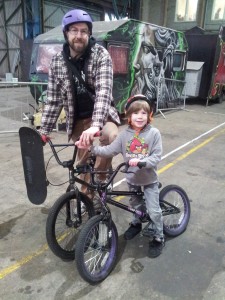 The last few weeks have been pretty busy. The picture above was taken a few weeks ago when I was down at T13 with Zane. He had been down for his first lesson on how to ride ramps the previous week and it turns out he is an absolute natural. So I came down the next with him, rented a BMX and joined him. First time Ive been on a BMX in about 25 years. Yeah… 25 years. Made me feel old. The six year old gave me some initial pointers and off we went..  I fell a few times but wounded nothing more than my pride and had a  total blast.

The running has been going well and I am still running every day. Ive had a few challenges. Firstly I started developing some plantar fasciitis symptoms. As many runners will know, this is something that can send chills down your spine. Its a nasty thing and if it gets really bad can stop you running. There are a lot of causes, such as running too much, being overweight and running on shoes that are dead. I’m 3 for 3 on that list. I didn’t stop but I ordered new shoes, KT taped the hell out of my foot, stretched it like hell every day and cut the running back for a few days running just one mile each day until the new shoes arrived. This is where the next challenge arrived. I had to go on a business trip to San Francisco. This meant running at bizarre times and through jet-lag. I also ended up ordering the new shoes to arrive to my hotel in SF, as they were cheaper in the US anyway.

On the bright side, the shoes arrived.. The new 2013 colour and design Newtons which are nice.. 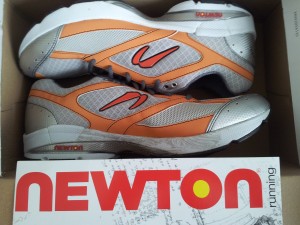 And of course, being in SF means even nipping out for short runs is a real pleasure, the scenery is a lot more impressive than where I live in Newtownabbey. 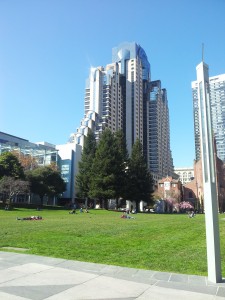 Anyway, I managed to get through the minor injury, got some new shoes, survived a transatlantic trip and tonight I clocked up run number 50. I also managed to get the distance up again the other night with a 6 miler which felt GOOD. Oh.. and I am still doing circuits and Karate Jutsu training at The Dojo, twice a week (when I’m in the country!)

So.. stats to date. 50 consecutive days running since the start of the year. No days missed, total distance to date is 143 miles and a total running time of 25 hours. Not bad at all!