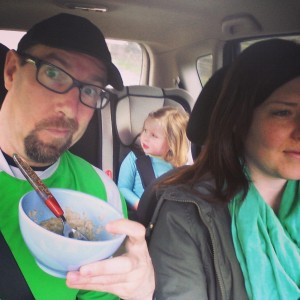 Quick breakfast on the way to the race

Last Monday I finished my second marathon. The last marathon I did was the Amsterdam marathon back in 2009. I’m not sure where the last 4 years have gone, as it really doesn’t seem that long.

Back in ’09 I was completely focused on running. That’s all I was training for and I worked hard at it. Fast forward four years and I’ve been running, swimming, cycling, boxing and, more recently, martial arts. As a result of this my running has clearly been less focused and not as strong.

The last marathon I did, I was really happy with my time. It was exactly what I had trained for and was a great race. This left me with mixed feelings about doing another marathon as if I were to do another, clearly I’d want to do better than last time… As a result of which, due to less running focus, I haven’t done another.

This year I decided I would do another accepted from the outset that I would be slower and signed up for the Belfast marathon. I’ve trained, but not exclusively for running and with no speed-work or tempo runs. Just getting some miles in and primarily enjoying running. Along the way I incurred a few injuries.. a bit of plantar fasciitis hit me and I got some overtraining syndrome symptoms both of which probably stemmed from running every day for about 3 months. I also took a few knocks to the ribs and got some bruising which stopped me running for a few days. At the end of all that though, I made it to race day healthy raring to go.

The race itself was really enjoyable. I wasn’t overly enthused about running in Belfast as the route isn’t exactly inspirational, but I really enjoyed it. I started out with a few friends who I was pacing and they stuck with me for the first ten miles or so. When they told me to go on I sped up a little and completed the race in 4 hours 42 mins. I actually managed to perfectly negative split the race. I did the second half faster than the first and the last 6 miles was the fastest part of the race, which I was really happy with. I finished feeling strong and was even able to have a sprint finish across the line. My legs hurt for the next two days but by the weekend I was back in the Dojo training again and feeling great.

Taking the whole race a bit easier definitely made the whole thing more enjoyable. I had a goal in mind which was to have an average pace of an 11 min mile and I managed to exceed that. By the halfway mark I decided I wanted to do it in less than 4:45 and I managed that too. I was a full hour slower than I was in Amsterdam, but I also did a lot less training and am about 12kg heavier too.

I originally signed up to do the race because my friend Tracy (who I paced for the first ten miles) asked me to help out with some fundraising by doing a leg with a team. I’ve done a leg of the relay twice before and decided that this year I wanted to do the whole thing. I didn’t push for sponsorship so if you have managed to read this far into the blog post and you can spare a few pounds, please do visit my Just Giving page and donate to a great cause, Marie Curie Cancer Care.

So there you go. I did another marathon, I enjoyed it and now I can see myself doing more. Marathon training is a lot less intense than training for triathlon!

Doing it in Belfast was a lot more fun than I expected. I raised money for a great cause, I ran with friends and I saw friends among the spectators. Childhood friends, current friends, even my next door neighbour were along the course and cheered me on. On the whole it was a brilliant experience. 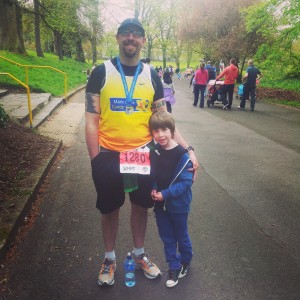 Posing with Zane when I finished 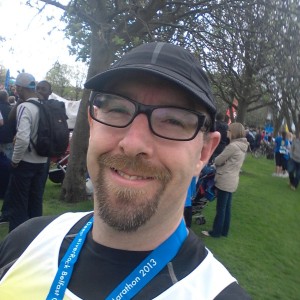