Bit of a change from the normal blog post. No training or nutrition content today.. a bit o fa  travel diary with my experience and photos from Japan. This is probably going to be a bit long and photo heavy. If you want to browse through the full gallery of photos go to the photography page

The journey to Japan was far from short. I left home on a Friday night to travel to Dublin for an early flight to London. 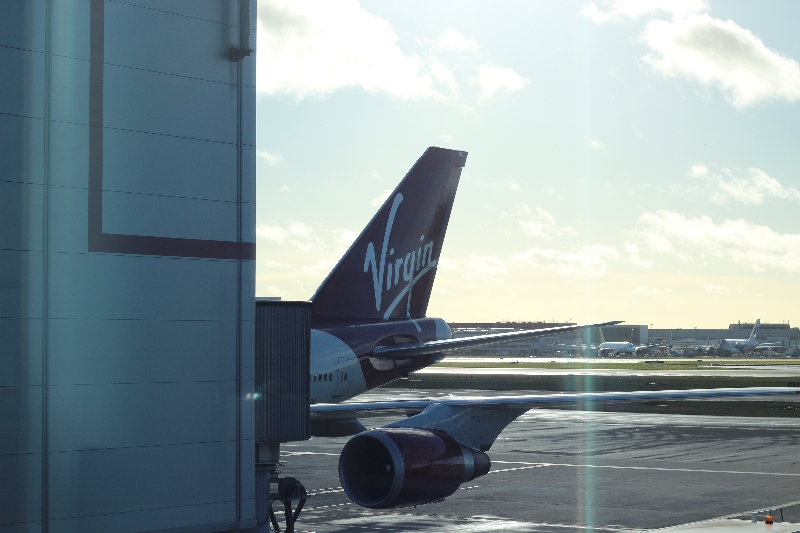 One 12 hour flight later and I arrive in Tokyo Narita airport. Its 9am and  midnight by my body clock. In Japan the day is starting.. And I’m starting to get tired. I manage to buy a bus ticket and wait to board the bus for the one hour journey into Tokyo. 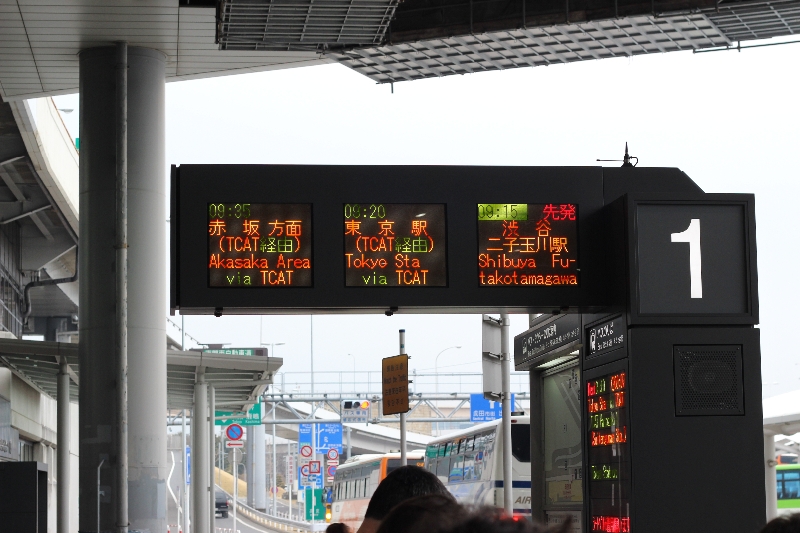 2 hours or so later after the long bus journey and a taxi ride, Im at my hotel. Its 11am and I cant check in till 3pm. OK. This is fine, I need to stay awake all day anyway or I will totally screw up my sleeping pattern and die for the rest of the week so off I go to do some sightseeing. First stop, Chiyoda park, where the Imperial palace is. On the way there, while standing at a set of lights waiting to cross the road, a guy in a Gi with a blackbelt cycles past me.

I guess I’m definitely in Japan.

As I walk around the park I’m immediately impress by how beautiful the city is. Its still early on a Sunday so its pretty quiet. But there appears to be a race of some kind going on round the park and people of all ages are running past me as I wander along taking photos and generally feeling a bit shell-shocked. 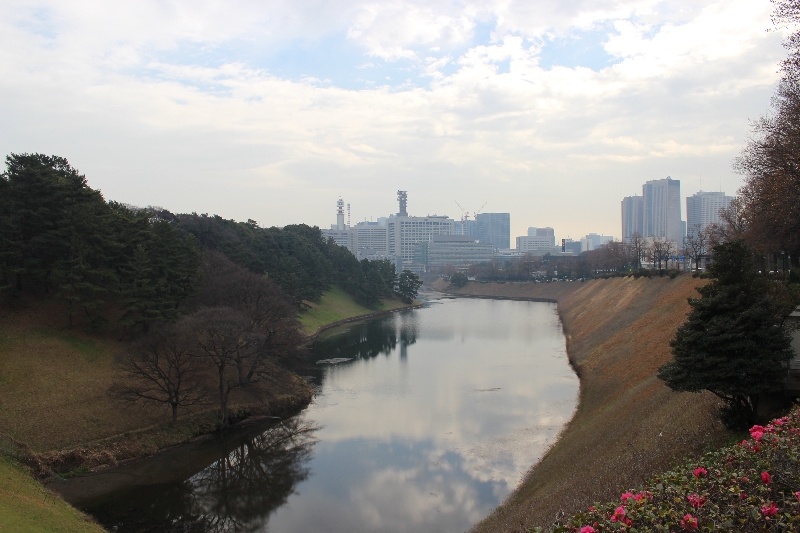 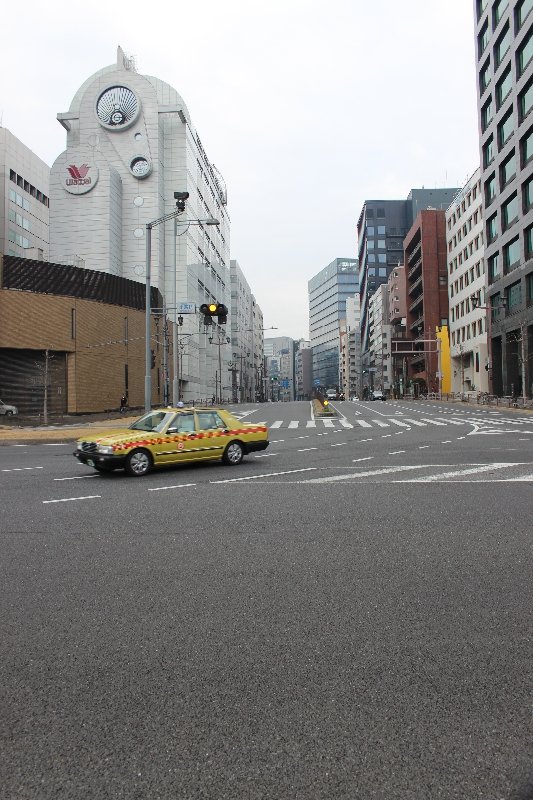 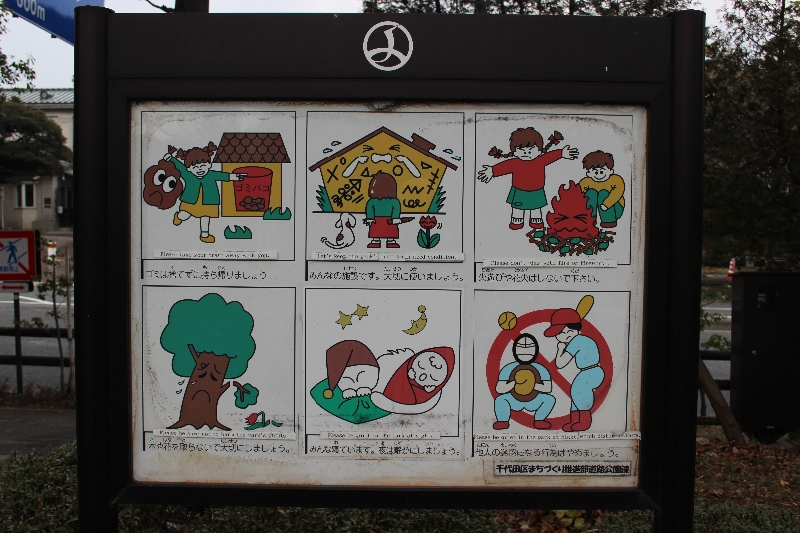 After a bit of clueless wandering I manage to find the Nippon Budokan. The Budokan  was originally built for the judo competition in the 1964 Summer Olympics and is also well known for a whole bunch of live albums that were recorded there by artists like Bob Dylan, Blur, Ozzy Osbourne, Avril Lavigne and Sheryl Crow. 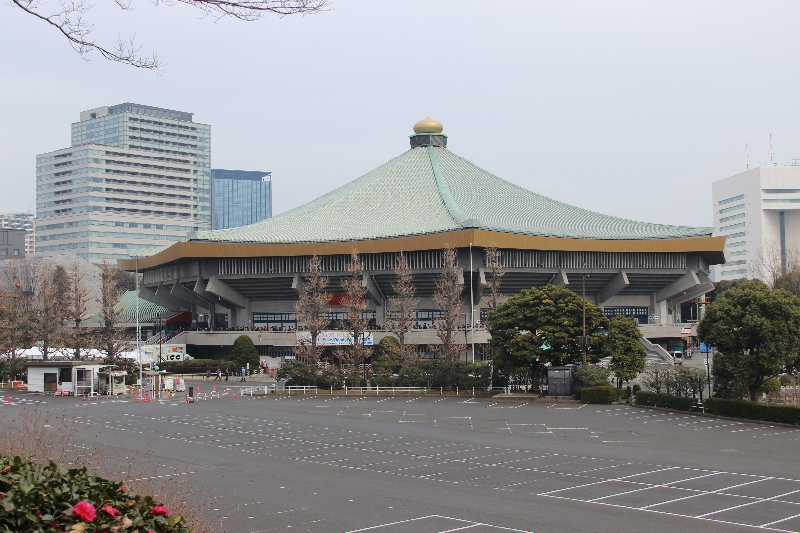 There was something going on when I got there. There was a massive bunch of people queued around the full length of the building to get to a bunch of stalls. 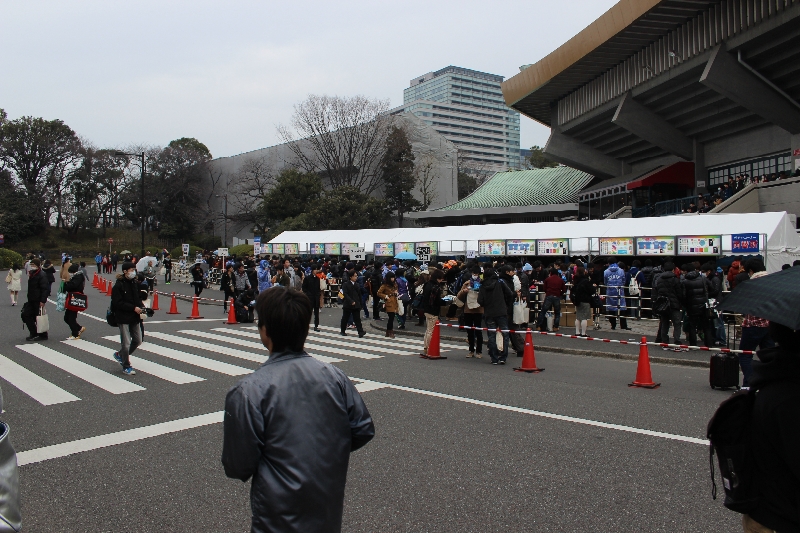 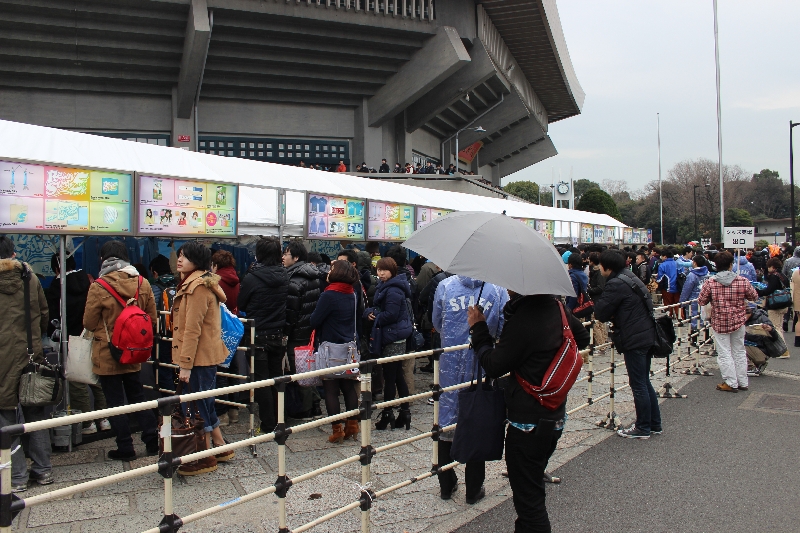 I’m pretty sure this was something to do with some local band or something, though the whole thing made little sense. This was where the feelings of exhaustion and jetlag morphed into something different. In Japan us white people (and other foreigners) are referred to as Gaijin, which literally means “outside person”. This was where I really started to feel like a Gaijin. Which is not in any way a bad thing, in fact the feeling of being an outsider possibly one of the coolest experiences of being in Japan.

After seeing the Budokan and whatever it was that was happening there, only an hour or so had passed and I was feeling OK so I decided to brave the subway and head somewhere else. 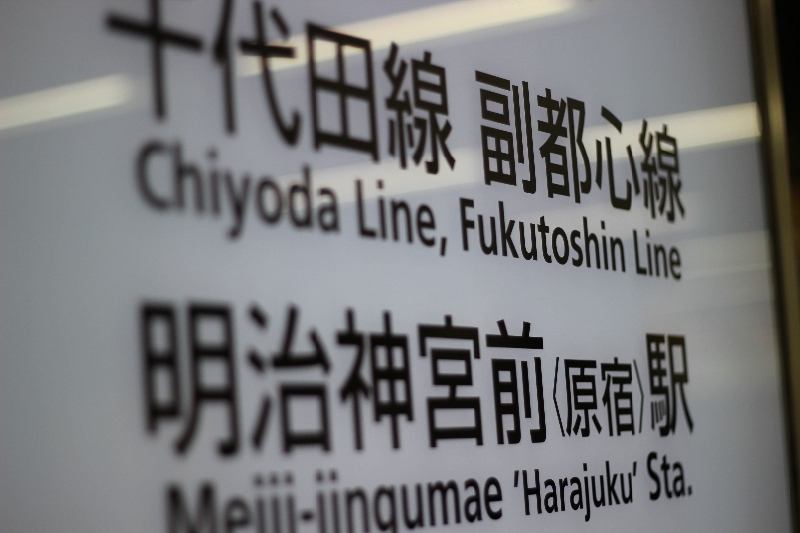 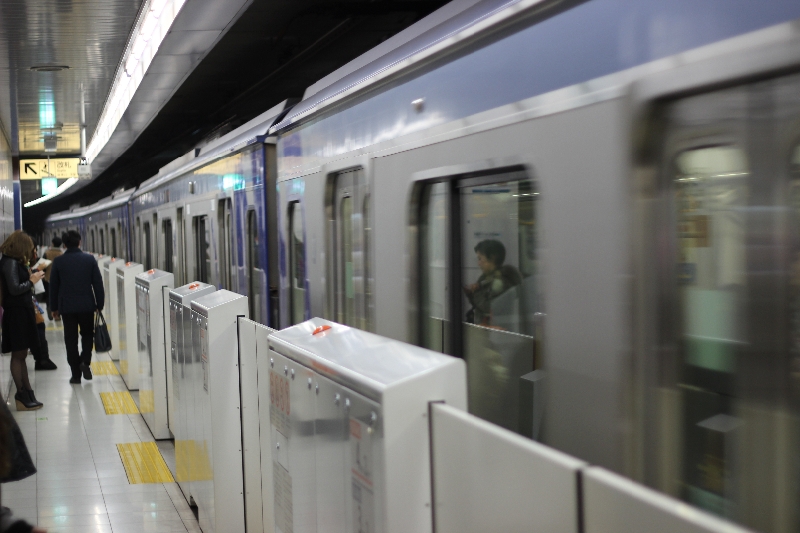 The subway was another cool experience. To begin with, I was the only white person on the train. I was also the tallest person on the train, many of the people standing around me barely came up to my chin. Again this feeling of being an outsider was pervasive and once more i enjoyed it. It is an experience that everyone should have, to be truly an outsider in an alien culture, it challenges your world-view and has gotta shake any narrow beliefs you may have.

My journey, which was remarkably not too stressful or difficult, was to Harajuku, Yoyogi park, and the Meiji Shrine. When I got off the train and made my way up to ground level I was immediately struck by how many people were around. It was busy in a way that you cant comprehend unless you’ve been in a major city. Actually, screw that. I’ve been in a tonne of major cities and I don’t think I’ve seen anything like this. Firstly the subway alone was jammed 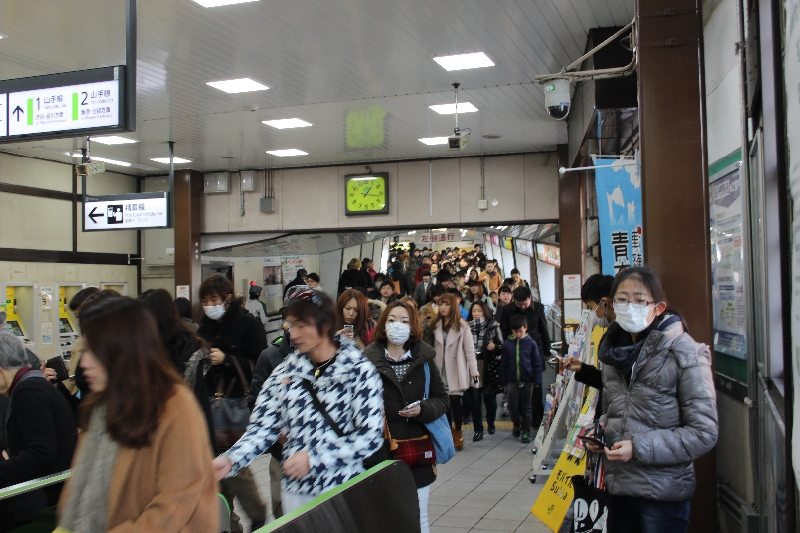 Now I’m pretty sure the more agoraphobic or socially anxious among you are already feeling a big breathless and tight-chested at this photo alone, but its nothing compared to what it was like on the street in Harajuku. The following two pictures hopefully capture a little of the sea of humanity that filled the streets. Look back.. its just PEOPLE EVERYWHERE. 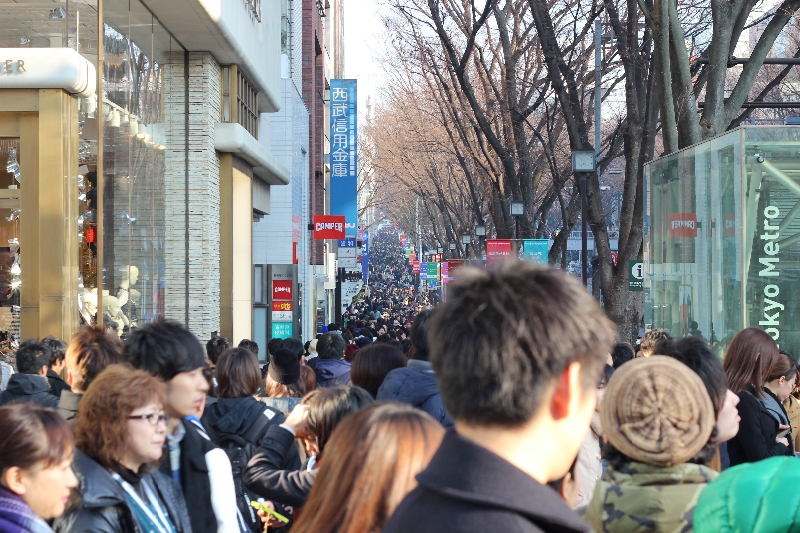 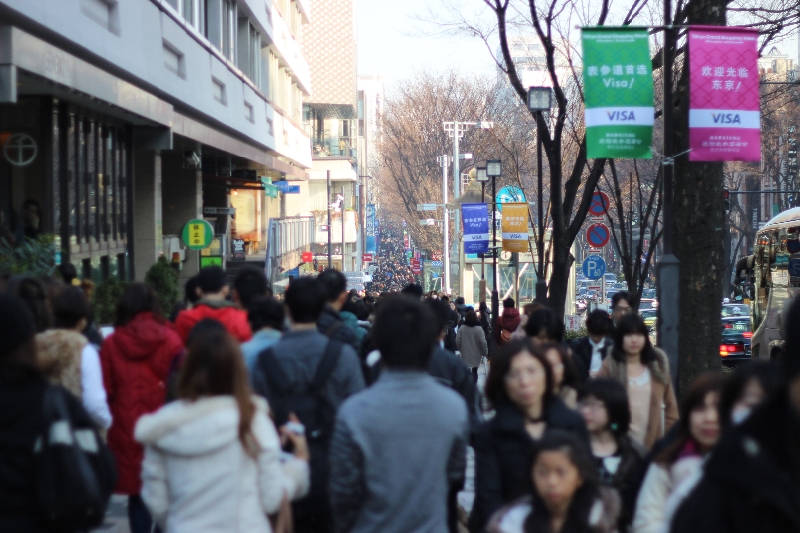 OK, I will give you a few seconds to breathe into a bag and recover from that panic attack. Now I should highlight that at this point Id been awake for a good 32 hours and hadn’t eaten for, ummmm, I dunno… ages. I had breakfast on the plane at some point but that had been a good 6 or 7 hours before and I was starting to feel a bit hungry, stressed and anxious myself. I wandered around a bit and tried to find somewhere to eat but of course everything was in Japanese and at this point it was all looking really confusing. I was very tempted to eat at this little dumpling place where I saw some locals in traditional dress  eating, but the menu was all Japanese and so where all the customers and I was too tired and freaked out to brave it. 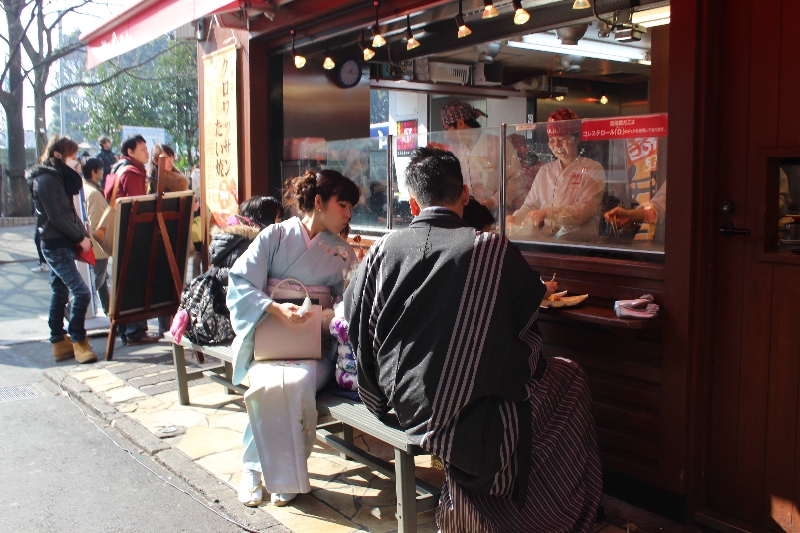 I eventually settled on a little cafe that had sandwiches in packages that I could just lift from a cooler and thus escape any form of communication confusion. I sat down to eat some sandwiches and drink some coffee and this was where I noticed another weird thing about Japan that I instantly loved. Beside where I was sitting there were a few chairs that had coats on them and bags sitting on the seats but no people. I ate my first sandwich, drank some coffee, had the second sandwich and then eventually the two girls who had been sitting on those seats arrived back. The fact that they were able to leave their stuff their and apparently feel completely comfortable that it would still be there when they returned really says something about Japanese society. I saw examples of this time and time again.

OK This is a long post with a lot of photos. I will stop here and call this the end of Part 1. I will post part 2, my visit to the Meiji Shrine tomorrow.